Performing in RealLivePeople Presents was an amazing experience. I really enjoyed sharing the space with such talented and fierce artists. Just watching what the other performers brought to the table was thrilling. Each piece had a strong and clear approach, whether it was about the exhaustion of explaining your move to the city or taking the spotlight from someone. I was inspired by the way the artists took their ideas and put them into movement, like Molly and Marlee smothering each other while asking the typical questions about their big move to New York or Sara removing Gina from the space so she could perform bigger than her. I was so inspired, it made me want to start investigating my ideas and create a piece of my own.

And that was just my experience from watching the other pieces! Performing in a piece with RealLivePeople was a different type of  opportunity to investigate myself as a dancer. I performed in Gina’s listening piece 3 times, a piece where the audience is invited to write down their interpretation, which we then use as an influence for the second and third time we perform it. Performing in this piece was totally out of my performance comfort zone, but I loved it. The excitement of not knowing what the intention of the 2nd and 3rd repetition would be was so fun. I have never performed in a piece that involved the audience so directly. I learned how different perspectives can influence movement, like having to scale my movement from little to big to follow the audience’s idea of the growth from childhood to adulthood.

As a dancer I get stuck in developing movement with the sole purpose of looking good versus movement that is created from a real feeling or intention, like 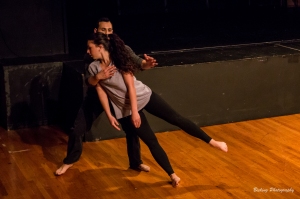 making the choice to do an inversion because that’s my way of not listening to someone rather than doing it to show everyone that I can do this cool upside down move. Performing with RealLivePeople was a fun and exciting learning experience; I am thrilled to continue to grow as a dancer.